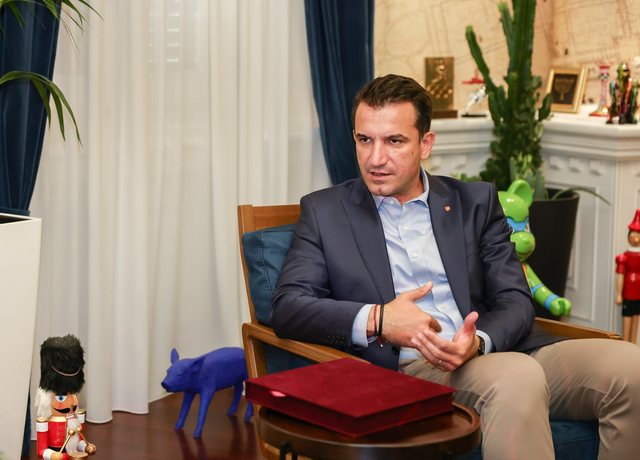 The Mayor of Tirana, Erion Veliaj, praised the territorial reform, which according to him gave opportunities to even the most remote areas to benefit from important investments, which would have been impossible before. In an RTSH interview with journalist Blerta Tafani, Veliaj described the opposition's proposals regarding the division of Tirana and the creation of several new municipalities as ridiculous.
Veliaj emphasized that the proposals of the opposition are only related to their narrow interests to benefit. "I have heard them, but for a man who has two minds in his head, this is a big, even stale, joke. You will tell me, to say that we make Dajti, Farka and Kashar municipalities on their own, and surround Tirana with 3 municipalities and then continue to Tirana, Zall-Herr, Zall-Bastar, Krrabë, Ndroq and Vaqarr . They are saying some things that have no logical point. So to have a Municipality of Tirana, be surrounded by other municipalities and then the Municipality of Tirana will continue. A person only needs to read this and understand that either those who worked on this commission were not sober, or they are just mocking people to tell the party that you see, we are taking out some municipalities where we can capture something more, so that when that balance is made and when the map is colored at the end of the local elections, some of our colors will appear. Yes, this is not only professional, but a big mockery. "It is enough to see the proposal that has been made for Tirana to understand that this is deeply ridiculous and insults the intelligence of any thinking person," declared Mayor Veliaj.

Veliaj underlined that the residents of the administrative units that have joined Tirana today live many times better than before thanks to the investments they received from the City Hall. "Do you understand what Krraba means to be on our own? It means that Krraba would never have been able to make the way from Lapidari to the center of Krraba. If Zall-Herri went out on his own today, it means that Zall-Herri will do the road of Çekrezi, Kasalla and all the water supply - which until yesterday was from wells, but today he gets it directly from Bovilla - himself. Do you know what it means to go out on your own? For us to go back to occupying the half of the lake we just vacated. Do you remember that 7 years ago half of the artificial lake was the first attack? Since you told me why I attack. No, why are you going to relocate the Roma? Today, Roma live better in social housing, but the lake has won. Today, "Sunny Hill" takes place at the lake and today the lake is part of the route certified by the European Athletics Federation for the marathon, where foreigners also come. So let's go back to those stories from which we barely escaped, it means that either you have no memory, or you are not sober, or you have decided to make fun of the people and tell the capital to surround you with three municipalities others and then continue to return them to Zall-Bastar. There is no logic. The Zall-Bastar road from "Rruga e Arbri" would never have been built. So with the taxes of Krraba, Zall-Bastari and Zall-Herri, it takes 60-70 years to build that kind of infrastructure. Today, Tirana really taxes the builders, developers, oligarchs tenfold, call them whatever you want, i.e. the rich, but with that money they build schools like "Sami Frashëri", but also build roads like Zall-Bastari".

Four children die in the UK after contracting Strep A

The price of oil and gasoline increases again. The gas does not change

How will the future of transport in Tirana be? Veliaj: The current service will be digitized

The weekend will be rainy

The times of Henry

Why do we like to be afraid (up to a point)?

Regret Kanye West's tattoo? A studio removes them for free

Temperatures drop significantly in the country

Horoscope for December 2 by Russell Grant

Why do we like to be afraid (up to a point)?

Regret Kanye West's tattoo? A studio removes them for free

Horoscope for December 2 by Russell Grant