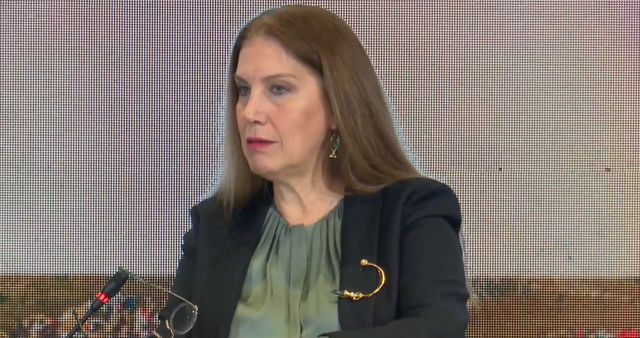 From the Forum of Integrated Waste Management and Circular Economy, the Minister of Tourism and Environment Mirela Kumbaro took stock of a year in the field of environment, announcing the direction that this sector will take towards recycling and composting.

"We succeeded with the programs of the Ministry of Tourism and the Environment, with the forces of the municipalities and with the support of very valuable partners such as the German government, the Swiss government, the Swedish government - to close in one year about 15 serious illegal dumping sites, although we have dozens others that require solutions. We closed it and rehabilitated it from the horror of Gërhot in Gjirokastër or from the garbage field that was burning in Përmet, to the illegal dumping sites in Burrel, Kukës or Krujë. From Skrapari or Këlcyra to Laç, Cërrik, Fier and Lushnjë, Dimal, Kuçovo, Berat."

At the event with the presence of Prime Minister Edi Rama and the participation of all mayors, Kumbaro said that currently 90% of the waste in the territory is collected, but recycling is at very low levels.

"From the 50% that we managed to collect in 2013, today we collect about 90% of the volume of urban waste, but we only manage to recycle a little, about 15%. While we produce over 888,000 tons of urban waste per year. We need to build the circular economy model. Not everything can be thrown away, many things can be reused, partially recovered, recycled in an organized manner by separating the waste at home. Not only because we have an obligation and commitment to the environment chapter in the open negotiations with the EU, but we especially have an obligation to our children when we think about what kind of Albania we will leave," said Environment Minister Mirela Kumbaro.

She mentioned that the National Cleaning Plan has continued throughout the year with impressive results, while also mentioning the fines to the mayors if they neglect to clean the city.

"I don't hide it, I didn't feel good at all when the National Environment Agency was forced to implement the law on Integrated Waste Management to take measures and fine some mayors. But it is a functional duty and a priority for every mayor not to allow himself indifference or failure in keeping the territory clean", said Kumbaro, referring to the fines that were imposed for the first time this year on the mayors of Malësia e Madhe, Poli?ani, Kruja and Vlora due to problems with the cleaning of their territories.

The event was organized in cooperation with the German Society for International Cooperation / GIZ, promoting the successful models of Saranda and Himara, where paper and plastic are collected for recycling, creating income for the municipalities, or the model of Cërrik, which is a pioneer in the composting process.

These models will be extended even further to other municipalities of the country, as Kumbaro emphasized as a priority for 2023 financial support instruments for municipalities that perform well and environmental education in schools to change the mentality of citizens towards waste.

Berisha was made the chairman of the youth forum. Evi Kokalari accuses Belind Kelliç of vote manipulation

Macron reacts after the Baguette was declared a UNESCO heritage!

The American musician dies a few hours after the wedding

Successful people do these 3 things on Sunday for a happier, stress-free week

Which zodiac signs are narcissists, according to astrology

Turkey: Sweden and Finland have made progress, but work is still needed to join NATO

Afghanistan, where women are no longer even allowed to go to the park

What did Balenciaga do that sparked outrage online and is being accused of inciting pedophilia?

Albin Kurti: We suspended the license plates, to give space to the Franco-German plan

How the Iranians got into our online systems

Meta, after the meeting in Berisha's office, says that he will join the protest on December 6

Together for peace! 300 artists from NATO countries concert on December 3 in Tirana

24 hours with Rita Ora and her partner where they talked about their relationship, but also about Albanians

The star of Top Gun and Die Hard, Clarence Gilyard, dies at the age of 66